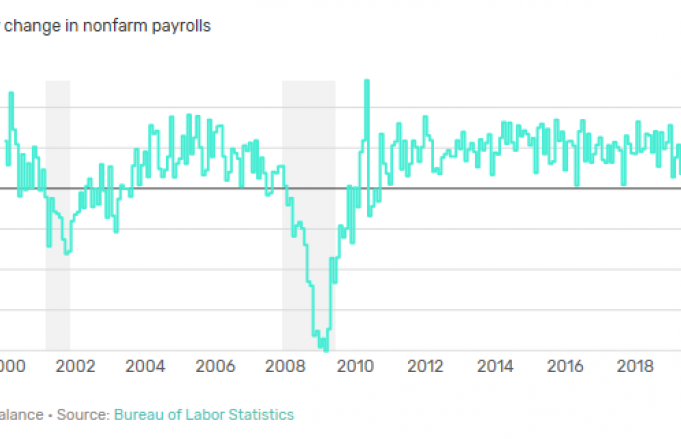 By Kimberly Amadeo
Updated July 05, 2019
Published by: The Balance

The U.S. economy gained 224,000 jobs in June 2019, according to the U.S. Bureau of Labor Statistics. There were strong jobs gains across the board.
The economy needs 150,000 new jobs each month to keep expanding. Weak growth means the Federal Reserve won't raise rates at its future 2019 Federal Open Market Committee meetings.

Where the Job Growth Came From
Health care added 50,500 jobs. On average, this sector adds over 30,000 jobs a month. It remained a strong performer even during the recession. Employers seem to be adjusting to Trump's changes to health care.
The government gained 33,000 positions. Transportation and warehousing gained 23,900 jobs.
Construction gained 21,000 jobs. The housing market usually speeds up in the warmer months. In June 2018, the industry added 56,000 jobs. This year's slow growth has many wondering whether the real estate market is going to crash anytime soon.
U.S. manufacturing gained 17,000 jobs despite a strong dollar and Trump's trade war. A strong dollar hurts exports. Countries in a trade war impose tariffs and international trade declines. Durable goods gained 12,000 jobs. Auto manufacturing lost 200 jobs.
Pay close attention to how many manufacturing jobs are added or lost each month. This is a significant leading economic indicator. Factories add workers as soon as they receive a large enough order. It could take months or even years before the order ships and shows up in economic output. Manufacturing is a better indicator of recession than the service sector, whose job levels remain consistent through the boom-and-bust cycle.
Leisure and hospitality gained 8,000 jobs. The sector typically adds from 20,000 to 30,000 positions a month.
Financial activities gained 2,000 jobs. Banks aren't adding as many positions since the Fed stopped raising interest rates. Higher rates bring greater profitability to lenders because they can charge more for loans.
Temporary help services gained 4,300 jobs. Companies often add temp jobs when business is picking up, but they aren't confident enough to add full-time positions.
Information services gained 2,000 jobs. This sector, especially Silicon Valley, is critical to American global competitiveness.
Utilities gained 1,400 jobs.

Industries That Lost Jobs
The retail industry lost 5,800 jobs. Store managers had been slashing jobs since March 2017. Online sales have cut into bricks-and-mortar store sales. Wholesale, which usually trends with retail, gained just 100 jobs.
The mining industry, which also includes the oil industry, lost 1,000 jobs. That's despite a drop in oil prices. Excess supply from U.S. shale oil producers is lowering prices. OPEC is struggling to limit its output. As a result, future oil prices are expected to remain subdued.

The U.S. Jobs Report Explained
The monthly jobs report is also called the "Employment Situation Summary" and the "Non-Farm Payroll Report." It's a critical economic indicator because it's the first report of the month. It's also the most comprehensive and credible.
The Bureau of Labor Statistics surveys 160,000 non-farm businesses and agencies on the number of jobs, the wages paid, and the hours worked. The jobs report will tell you which industries are adding jobs, whether American workers are working longer hours, and how fast salaries are increasing.
The jobs report also provides the unemployment rate. To get the number of unemployed individuals, the BLS must undertake a separate survey of households instead of businesses. This household report also includes workers' age, sex, and race/ethnicity. The household survey has a more expansive scope than the establishment survey. It includes the self-employed, unpaid family workers, agricultural workers, and private household workers. They are excluded by the establishment survey.
The household survey is not as accurate as the business establishment, though. It has a smaller sample size. That's why employment numbers are taken from the establishment survey. So the current unemployment statistics show a different trend than the jobs report.

Other Jobs Reports
There are two other jobs reports. The monthly ADP National Employment Report® is released on the first Wednesday of each month. It's produced by the ADP Research Institute, SM and Moody’s Analytics. It uses business payroll data to report on the number of jobs added in the private sector. It excludes farming, as does the BLS report. But more importantly, it also excludes government jobs, which are included in the BLS report. For that reason, it's considered incomplete.
It gives some analysts an earlier view of what might happen in the Friday report. ADP is quick to say it's not intended to be predictive. Like the BLS report, it's revised as more data comes in later in the month. These revised numbers are 96% correlated with the revised BLS jobs report.
The Department of Labor also releases a weekly jobless claims report. This measures the claims for initial unemployment benefits reported by each state every week. It also says how many of the unemployed are still receiving benefits. This report gives an indication of trends, whether there are more or less of the unemployed than the week before. The main value of this report is that it is weekly and so it gives some idea of trends between the monthly jobs reports. It isn’t accurate when predicting the monthly report because it is volatile.

Health care added 35,000 jobs in June, in line with its prior 12-month average monthly change